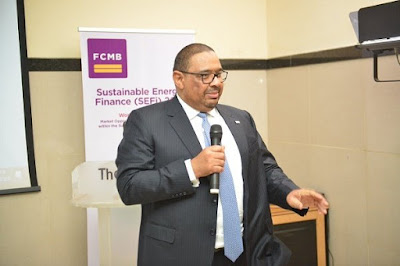 The Managing Director, First City Monument Bank Limited, Adam Nuru, has volunteered to go on leave to enable the bank to investigate the paternity allegations against him.

This was disclosed in a statement by the bank on Tuesday.

“While this is a personal matter, the tragedy of the death of Mr Tunde Thomas and the allegations of unethical conduct require the bank’s board to conduct a review of what transpired, any violations of our code of ethics and the adequacy of this code of ethics.

“This is already under way. During the period of the review, the managing director has volunteered to proceed on leave. This will guarantee the sanctity of the review process.

“We enjoin all our stakeholders to bear with us as we conduct this review and to please respect the various families involved.”

About 1,927 persons had called for the sacking of Nuru over alleged infidelity with a former employee of the bank, Moyo Thomas.

The petition requested the Central Bank of Nigeria and the FCMB board to dismiss Nuru on ethical grounds.

This occurred after the death of Moyo’s late husband, Tunde, who reportedly died of depression recently after Moyo allegedly told him some months ago that her two kids were fathered by Nuru.

Moyo had allegedly left Tunde and travelled to the United States with the kids, allegedly informing him that the children were not his when she got to the US.

Tunde was said to have been down with stroke but later recovered.

It was gathered that Tunde tried to put the matter behind him and decided to remarry.

He reportedly suffered a cardiac arrest and died two days to the introduction ceremony of his new girlfriend.