EPL: Guardiola sympathises with Lampard over sack from Chelsea 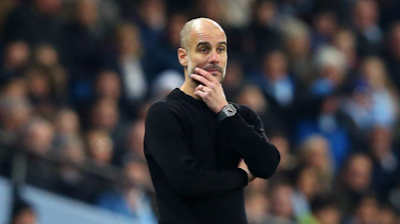 Guardiola said this while expressing his sympathy for Lampard following his sacking by Chelsea.

Lampard was dismissed on Monday by Chelsea owner, Roman Abramovich, after 18 months in charge at Stamford Bridge.

Speaking ahead of Manchester City’s Premier League clash on Tuesday, Guardiola was quoted by MEN as saying on Monday at his pre-match press conference: “Here, you have to win. People talk about projects and ideas, but it doesn’t exist. You have to win, or you will be sacked.

“I respect the Chelsea decision but a huge hug for Frank, hopefully when the lockdown is over, I can go to a restaurant and see him again.

“We depend on results, not the way we play or philosophy. You have to get results, and if you don’t you will be replaced.”

“All managers need this, all ideas are good, but I’m not judging Chelsea’s decision because I am not there,” he added. “Every decision has to be respected in that way.

“Sometimes, journalists ask clubs to be patient when the journalists don’t have patience.

“Our world is to try to win as much as possible and if that doesn’t happen and you don’t have the sporting director and owner and board in the same line and know where you have to go … every manager needs time to do what you believe and let the players believe.

“That is exceptional. It happens in a few places all around the world because everyone wants results immediately and wins the Premier League in November rather than January, or January rather than May.

“It’s difficult to talk about projects because in one month you can drop everything you have built because the opposition has good teams and managers too.”