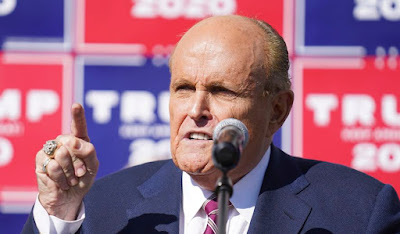 The firm provided electronic machines used to process votes for the 2020 US presidential election in 28 states.

Although President Joe Biden defeated Trump in the election, the former president and his team promoted conspiracy theories about Dominion, alleging that the firm had used its electronic machines to steal millions of votes for Biden.

However, there was no evidence presented to back up the claims, which have been debunked by various groups including election technology experts.

But Giuliani had stood by his claims, saying he came under attack for exercising his right of free speech.

In a 107-page lawsuit filed in the federal district court in Washington, on Monday, Dominion accused Giuliani of carrying out “a viral disinformation campaign about Dominion” concerning the US elections.

The US voting company said it filed the suit to set the record straight, stand up for itself, employees and the electoral process.