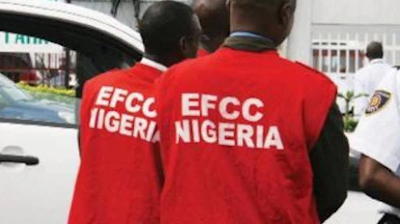 The Zonal Head, the Economic and Financial Crime Commission (EFCC) Uyo, Edeh Akpa Uchenna has confirmed that the Commissioner for Environment in Governor Ben Ayade’s cabinet was being investigated.

Speaking to newsmen on Friday, the Head of the Zonal office, confirmed that the Commissioner for Environment was with the Commission for questioning.

“One Mfon Bassey, Commissioner for Environment is being investigated by the EFCC, yes, he was with us yesterday (Thursday) and he was with us this morning, this Friday and we are questioning him on certain allegations levelled against him,” he said

“Though we are investigating him, he is not in our custody, he only reported to us when we invited him and he has been honouring our invitations,” he said.

It was alleged that the embattled Commissioner was arrested and is currently cooling off in the custody of the Economic and Financial Crimes Commission (EFCC).

The Commissioner was reportedly picked up on Thursday at his residence in Calabar, Cross River State after he refused to obey several invitations by the commission.

His arrest, according to highly placed sources is in connection with several shady deals, fake contract documents to obtain funds and other related offences our source said.

It was alleged that Mr. Mfon Bassey has been running shady financial errands for Mr. Frank Ayade who is Governor Ben Ayade’s younger brother through one of the commercial banks.

Our sources say although the account officer is cooperating with officers at the anti-graft agency, Mr. Mfon Bassey has refused to even write a statement, claiming to be unable to read and write.

Until he was appointed Environment Commissioner, Mfon was the Chairman of Calabar Transportation Regulation Agency (CTRA).

Mr Bassey did not pick several calls made across to him on Friday by newsmen.