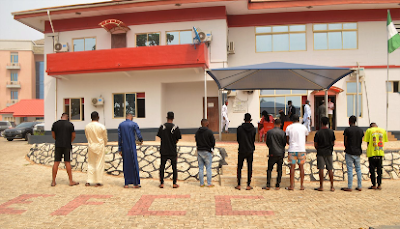 The EFCC said its operatives arrested the suspects with about 12 exotic cars, including SUVs and others.

According to a statement on its Twitter handle, the anti-graft agency explained that it acted on intelligence and swooped on the suspects’ hideouts in Osogbo.

Also, mobile phones, laptop computers, and other devices were recovered from the suspects.

At the moment, the EFCC explained that the eleven suspects, some of whom claimed to be students, artisans, farmers and businessmen, are being interrogated to ascertain their level of involvement in the alleged crime.

“They will be charged to court as soon as investigations are concluded,” it was said.