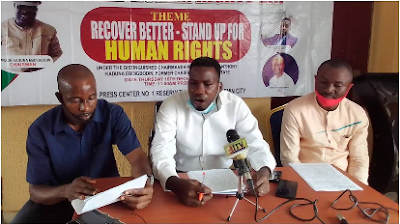 Civil Society Organisations in Edo State have issued a 48-hour ultimatum to the state Commissioner of Police, Johnson Babatunde Kokumo to publish the names and photographs of suspects who escaped the State Criminal Investigation Department cell on new year’s eve or face the wrath of the law.

The CSO’s under the aegis of Network of Civil Society Organizations of Nigeria (NOCSON) said the state’s Commissioner of Police needs to urgently wake up to duty.

Acting President of the group, Comrade Ogbidi Emmanuel demanded the publication of details of all the jailbreakers on both local and national prints and electronic media, within 48 hours, declaring them wanted.

“That the police must detain and isolate all officers that were on duty including the senior officers that had dealings with the cell 24 hours before the incident as we cannot rule out their possible contact with the criminals on the run and their identities be made known to the public”, he said.

Ogbidi alleged that with the recent cell break, the jailbreak at the two Correctional Centres in the state in October 2020, has nothing to do with the End SARS protest, therefore, the government should constitute a panel of enquiry to unravel the circumstances surrounding it.

He said with the findings of the CSO’s and interactions with Police authorities after a visit to the state police command, that it was worrisome that ten suspects could escape from the facility.

He warned that the civil rights group will not tolerate such as it puts the citizens of the state at a great security risk.

“These findings beat the imagination of our network (NOCSON) and remain a bitter pill to swallow. Neither should we allow Edo people to suffer further insecurity as a result of the actions and inactions of some unpatriotic police officers.

“While we will not allow this avoidable incident to be swept under the carpet, we wish to indicate our interest and readiness to follow the Investigation to a logical conclusion and ensure that those found culpable are brought to book no matter how highly placed in the force.

“If criminals can escape from the state command, which is regarded as the most secured police cell in Edo state, therefore suggest to us that there are more revelations to be uncovered as it concerns the security situation in Edo state under the watch of the CP, Mr. Johnson Babatunde Kokumo”, he said.