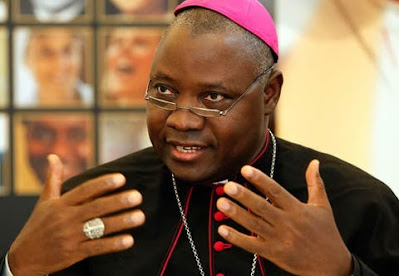 Archbishop of Abuja Catholic Archdiocese, Most Rev. Dr. Ignatius Kaigama, has condemned the incessant kidnapping of catholic priests and other ministers of God, describing it as molestation of the church.

Kaigama, in his homily on Sunday at St. Anthony’s Parish, Yangoji, Abuja, said an act of kidnapping was criminal, ungodly, and degrading to humanity.

Kaigama, who spoke at a mass to mark Solemnity of Baptism of the Lord, said it should be clear to the kidnapers that the mission of Catholic Church was to bring good news to the needy and poor.

“Whatever may be the motive of the kidnappers, monetary or sheer intimidation, it should be clear to those engaged in such nefarious activities that the Catholic Church brings good news to the poor through huge sacrifices.

“She complements the government’s efforts through her selfless social, educational, and medical services to the needy, so molesting the Church is molesting the needy.

“Whatever the Catholic Church has and does, is for the good of all, irrespective of religious, ethnic, or political differences,” he said.

“We pray for the release of those who are still in captivity and for the conversion of the perpetrators of this inhuman act.

“May Christ manifest Himself to the perpetrators of such evil actions as kidnapping, rape, killings, etc and grant them a change of heart,’’ he added.

Kaigama said the purpose of his visit was to pray with the parishioners and to encourage them to persevere more in faith.

He said they should not give in to despair with the happenings around them, especially in the light of the kidnap of their parish priest.

He recalled that the Parish Priest, Rev. Fr. Matthew Dajo was detained by his captors for 10 days, from November 22 before his release on December 2, 2020.

“We thank God that despite his travails in the hands of his abductors, he remains generally well, apart from the psychological trauma he still suffers.

“I commend you for your strength of faith, and for persevering in prayers with the conviction that he would be released.

“You did not allow the sad incident to demoralise you as you continued your spiritual and pastoral activities to the surprise of the perpetrators of such an evil,’’ the Archbishop said.