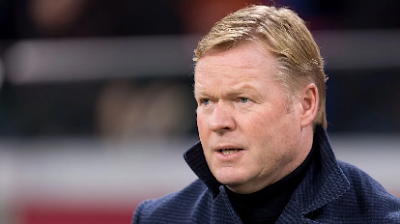 Barcelona boss, Ronald Koeman, has slammed his players for missing two penalties against Cornella in the Copa del Rey round of 32 fixture on Thursday night.

Koeman said Barcelona players are scared to take a penalty against Cornella, adding that they aren’t serious.

Two extra-time goals from Ousmane Dembele and Martin Braithwaite sealed a 2-0 victory for Barcelona against Cornella at the Nou Municipal stadium in Cornella, Thursday.

Miralem Pjanic and Dembele had both failed to score penalties in normal time.

Pjanic and Dembele now join a list of five Barcelona players to have missed penalties this season for Koeman’s side, along with captain, Lionel Messi, Antoine Griezmann and Braithwaite.

“I don’t understand because normally there are enough players who can score penalties,” Koeman said at a post-match press conference.

“Maybe they are scary. I don’t know. Several players have failed and, above all, if you score one of the two penalties, you calm down.

Barcelona’s next fixture is against Elche in the La Liga on Sunday.