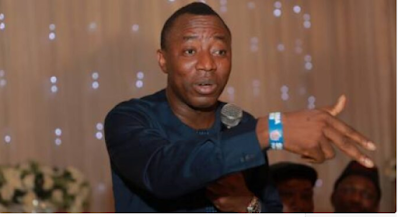 Ruling on the bail application filed by Omoyele Sowore, convener of the Revolution Now Movement, has been stalled owing to his absence in court.

The police arraigned the five persons on Monday on a three-count charge bordering on conspiracy, unlawful assembly and incitement.

Mabel Segun-Bello, the magistrate, had ordered that they be remanded at the Kuje correctional centre.

However, on Tuesday, they were transferred to the Force Criminal Investigation and Intelligence Department (FCIID) after Sowore reported that they were denied access to healthcare, food, and water.

Addressing journalists at the court premises on Friday, Marshal Abubakar, counsel to the defendants, said there is confusion among the prosecution as to who is responsible for the case.

“This morning we have reached out to the authorities to bring the defendants to court to listen to the terms and conditions upon which bail would be considered,” he said.

“In service, the moment you request for the case file of a suspect and the case file was officially transferred to you, it is assumed that you have taken over responsibility of that particular matter.

“When I spoke to the CP this morning and the prosecutors and the IPO, they did inform me that the FCIID has taken over the matter officially. So on that basis, they said they don’t have a vehicle to convey Sowore and the other defendants to court.

“We took our time to reach out to the authorities of the FCIID. We asked them that since they have taken over this case file, how would the defendants be brought to court to listen to their bail application.

“And they said it is not in their place and they are not interested in Sowore’s case because of the political nature of that matter.

“This means that the DPP are now responsible for prosecuting this particular case.

“The court has also requested that since the ruling is for the defendant, it is expedient that they be brought to court to listen to the order.”

Although counsel from the police force was already present in court to listen to the ruling on the bail application, there is no legal representative from the office of the DPP.