Confusion as police arrest 47 herders ‘with firearms’ in Oyo 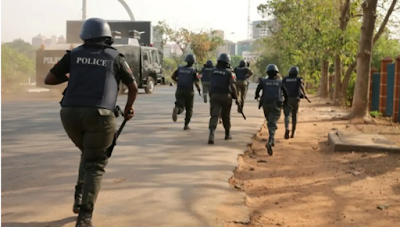 There was confusion on Sunday as operatives of Operation Burst arrested 47 herdsmen during a raid at Tapa/Igangan axis in Ibarapa North local government area of Oyo state.

Oladipo Ajibola, director-general of Operation Burst, confirmed the arrest of the herders alleged to have been on a reprisal mission.

The security operatives visited Ibrapa axis on Sunday following reports of unrest, subsequently apprehending the 47 suspects said to have been caught in the possession of arms.

According to Olugbenga Fadeyi, spokesman of the state police command, the suspects claimed that they were trailing some kidnappers who were about to collect ransom from relations of a kidnapped victim.

Fadeyi said the suspects have been transferred to the State Criminal Investigation Department (SCID), Iyaganku, Ibadan, and investigations are in progress.

HOW IT ALL STARTED

Seven people were killed on Saturday following a clash between some gunmen and men of the Oyo State Security Network Agency better known as Amotekun Ibarapa.

Amotekun was accused of targeting herdsmen in the region.

But it said the exercise carried out by the corps in four local government areas to rid the areas of criminals was done in collaboration with vigilantes, hunters and Miyetti Allah.

Reacting in a statement, Jide Ajani, special adviser on media to Seyi Makinde, governor of Oyo state, said those claiming the Fulani were being targeted only wanted to create ethnic tension.

“In fact, not just members of Miyetti Allah, but some Fulani were part of the operations, with the Seriki being fully briefed about the operations. Some lives were lost; some sustained injuries. Those killed in the process were criminals and not herdsmen.

And, the coalition, led by men of AMOTEKUN, succeeded in sending a very clear message to criminals terrorising the people: that enough is enough,” Ajani said.

The arrested herdsmen were said to be on a reprisal mission to avenge the killing of some of their colleagues by Amotekun.

But Ibrahim Jiji, chairman of the Miyetti Allah Cattle Breeders Association in the state, in a statement on Monday said the 47 herdsmen arrested are members of the Vigilante Group of Nigeria (VGN) securing people in Ibarapa land.

He asked the state government to release the suspects whom he said have been instrumental in securing the axis.

“Those who were going to fight criminals are the set of the people they are parading as criminals. Those people are not criminals; they are the people securing us. They are registered vigilantes and they are working with the police and other security agencies,” Jiji said.