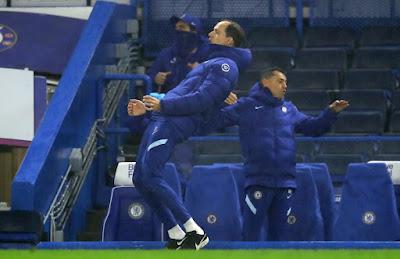 Chelsea started their new era under Thomas Tuchel on Wednesday with a disappointing goalless draw against Wolves as Manchester United eyed top spot in the Premier League.

Club owner Roman Abramovich handed the 47-year-old a brief to revive the fortunes of a team that had lost five of their previous eight Premier League games.

That slump in form — after a bright start to the season — has raised fears among the club’s hierarchy that they could miss out on the riches of next season’s Champions League.

Tuchel omitted Mason Mount from his first starting line-up, even though the England midfielder was a regular starter under Lampard.

Cesar Azpilicueta was captain, with Jorginho and Mateo Kovacic in midfield, and Callum Hudson-Odoi making a start.

Chelsea struggled to make an impression against Nuno Espirito Santo’s men, whose form has nose-dived after forward Raul Jimenez fractured his skull in late November.

The home side dominated territory and possession, but created few clear-cut chances and the visitors had opportunities to leave with all three points.

“I enjoyed it a lot because I was very happy with the intensity, the attitude, energy and quality of my team,” Tuchel told the BBC. “We were well organised, had a lot of ball recoveries in the last third, never lacked intensity.

“We stepped up minute after minute in the second half. I was very happy performance-wise. Unfortunately we couldn’t score. If we take care of our performance like this the results will come.”

Chelsea made 433 successful passes in the first half — their most in the opening period of a Premier League game since 2003/04.

But they were too ponderous to take advantage of that territorial dominance and it was a similar story after the interval.

Wolves nearly caught Tuchel’s men with a sucker punch as Pedro Neto ran onto Daniel Podence’s flick and raced into the Chelsea area before clipping a shot over Edouard Mendy and onto the crossbar.

The introduction of Christian Pulisic and Mount in the closing stages gave Chelsea some momentum but despite some late pressure, they could not find a way through.

The draw lifted Chelsea to eighth spot, five points behind fourth-placed West Ham but Tuchel knows time is not on his side, with more than half of the season gone.

He admitted he had not yet been able to properly assess his squad.

“It was today totally unfair because I had no explanation for anybody on the side why they didn’t play,” he said. “Every day will help.”