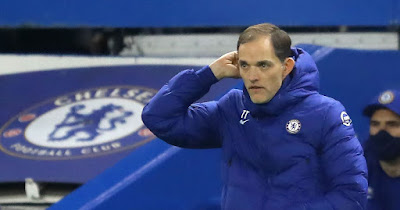 The former Paris Saint-German boss was brought in to replace Frank Lampard last week with a brief to haul stuttering Chelsea back into the race for Champions League spots.

He endured a frustrating goalless stalemate against Wolves at Stamford Bridge in midweek and Burnley also promised to be awkward opponents before fading as the match wore on.

Tuchel’s team dominated the encounter, limiting Burnley to a single attempt on goal but struggled to break them down.

But two moments of magic from Azpilicueta and Alonso mean the German now has four points from six after two matches at the helm.

The result lifts Chelsea to seventh in the Premier League, just four points behind fourth-placed Liverpool, who are in action later on Sunday.

The home side took time to settle into a rhythm but as the first-half wore on they started to dominate and created a number of chances.

England midfielder Mount, who has been in outstanding form this season, was surprisingly left out against Wolves but was back in the starting line-up on Sunday.

Chelsea finally got the breakthrough their football deserved five minutes before the break after breaking at pace.

The ball was worked to Callum Hudson-Odoi on the right side of the Chelsea attack.

He cut inside and played a neat reverse ball into the path of Azpilicueta, who produced a thumping side-foot finish past Nick Pope after racing from deep in his own half.

Chelsea started the second half on the front foot, pinning the visitors back.

The luckless Werner, who has scored just once since November, headed straight at Pope before the lively Hudson-Odoi hit the post with a powerful defected shot.

Hudson-Odoi flashed a ball across the Burnley box before Mount tried his luck from distance.

Christian Pulisic, who came on at half-time to replace Tammy Abraham, mishit his shot after more good work from Hudson-Odoi before Pope saved with his legs from substitute Reece James.

But Chelsea had little to fear at the other end, especially after Burnley lost the physical presence of forward Chris Wood shortly after the hour mark.

Alonso, who had fallen out of favour under Lampard, sealed the three points six minutes from time when he controlled a Pulisic cross on his chest before lashing past Pope.

He kissed his Chelsea badge as the players celebrated a vital three points.