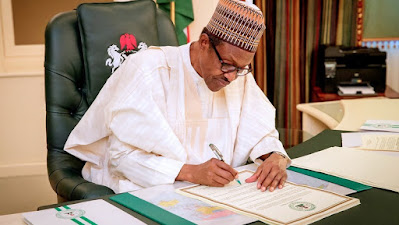 President Muhammadu Buhari has approved the posting of ambassadors-designate to the country’s missions across the world.

In a statement on Tuesday, Gabriel Aduda, permanent secretary of the foreign affairs ministry, said the approved list has 43 career ambassadors and 52 non-career envoys.

Aduda said with Buhari’s approval, the process of requesting “Agrément” from the host countries has commenced.

“The Ministry of Foreign Affairs wishes to inform that His Excellency, President Muhammadu Buhari has approved the posting of Ambassadors Designate to Nigerian Missions abroad. The list includes 43 Career Ambassadors and 52 Non Career Ambassadors,” the permanent secretary said.

“With this development, the process of requesting Agrément from the prospective host countries has commenced.

“The ministry also wishes to inform that there will be an induction course for the ambassador designates and their spouses which will hold on a date to be announced shortly, to prepare and facilitate movement of the envoys to their respective missions.”

The president’s approval is coming about six months after the senate confirmed 40 nominees as ambassadors-designate in July 2020.

Buhari had sought the confirmation of the nominees in May.

Debo Adesina, editor-in-chief of The Guardian newspaper, is among the nominees confirmed as ambassadors-designate by the federal lawmakers.