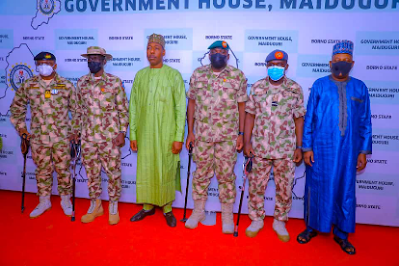 Nigeria’s Service Chiefs travelled to Borno on Sunday as the renewed war against Boko Haram gets underway.

The state has been the epicentre of insurgency for more than a decade.

The military heads met Governor Babagana Zulum at the Government House in Maiduguri, the Borno capital.

He called for an improved military-civilian relationship to boost trust and increase intelligence gathering.

Zulum assured the Generals of his administration’s commitment to assist the military in any possible way to ensure victory against the enemy.

The governor advised them to tolerate fair and constructive criticisms that will enhance their productivity.

“In democratic settings, the military is an establishment, subject to constructive criticisms by well-meaning citizens. Therefore, you are expected to accept such in good faith”, Zulum said.

He added that for the Nigerian military to achieve success, there must be robust coordination and collaboration among all arms.

Zulum charged forces to sustain their firepower and deny insurgents breathing space by blocking all routes they use to launch attacks.

In his remarks, Irabor assured that military operations will receive a boost and vowed to wipe out insurgents.

The CDS craved the understanding and support of the civilian population in the fight against terrorism.