Abramovich sacking Lampard is not my problem – Mourinho 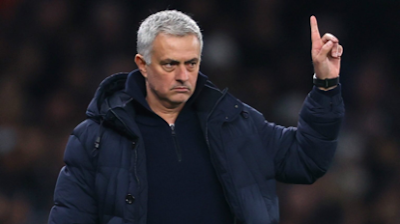 Lampard is under intense pressure at Stamford Bridge, following a run of poor results.

The Blues’ 2-0 loss at Leicester City in midweek, was their fifth league defeat in their last eight fixtures. It leaves them in eighth place on the table.

Senior officials at the club want to give under-pressure Lampard time to turn the club’s fortunes around and not make a decision mid-season.

However, they are believed to be considering Southampton boss Ralph Hasenhuttl, RB Leipzig’s Julian Nagelsmann and Thomas Tuchel who was just sacked at Paris Saint-Germain.

Ex-Juventus boss Max Allegri has also admitted he wants to manage in England.

Mourinho himself has been sacked twice by Abramovich in the past.

When asked on Friday if he feels the Russian will give Lampard time to turn the team’s fortunes around, he replied: “No, that’s not my problem at all.”