‘You still crack me up, my winter rose’ — RMD celebrates wife on 20th wedding anniversary 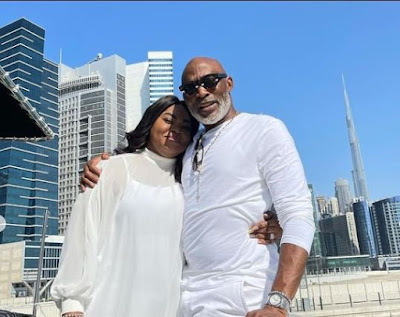 Richard Mofe-Damijo, a Nollywood actor better known as RMD, has taken to social media to celebrate Jumobi, his wife, on the occasion of their 20th wedding anniversary.

In a post on his Instagram page on Tuesday, the 59-year-old movie star expressed his gratitude to God for the privilege to be celebrating 20 years with Jumobi.

“It’s our 20 years anniversary! Hmmmm, Like they say, 20years nor be beans o! At the centre of it all, it has just been God. Thankful. Grateful. Blessed. Graced,” he wrote.

In another post, RMD shared pictures of himself and Jumobi having a great time together on a boat cruise.

In the caption that accompanied the post, he showered praises on his wife and described her as his “Winter Rose.”

“20 years later, you still crack me up my WinterRose. Thank you my Abk , my Aabike, my Dejumo, my Abiks,” he wrote.

The Delta-born ace actor has starred in several movies including ’10 Days in Sun city’, ‘The Wedding Party’, ’30 days in Atlanta’ among others.

RMD got married to Jumobi, a former television presenter, in 2000, four years after the death of May Ellen Ezekiel, his first wife.

The former Commissioner for Culture and Tourism in Delta state has four children; two from his previous marriage and the other two from his current union.