You did not visit Rivers for our case – Northern community accuses Prof. Ango Abdulahi 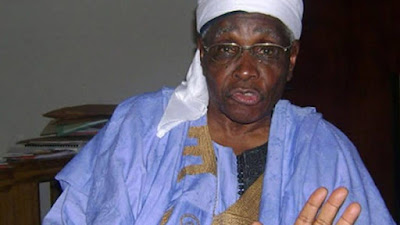 The Northern Community in Rivers State has claimed the visit by the Prof. Ango Abdulahi led Northern Elders Forum, NEF to Governor Nyesom Wike was not in the interest of Northern businessmen and residents in the state.

Leader of the Northern Community in the state, Musa Saido said this in reaction to the visit by Prof. Abdulahi and his delegation to the Government House in Port Harcourt.

Saido, who is also the President of the Arewa Initiative for Peaceful Coexistence claimed that the Northern Elders were only in Rivers State for other purposes because they did not meet with those affected by the hijacked End SARS protest in the state.

“Personally, I was not aware of the visit. And they said the visit if for End SARS victims. I was the one who communicated with security agencies when the End SARS protest turned violent and all those who killed, I buried them at Trailer Park.

“What we are saying is that my organization and I, are not aware of that visit. And as for the Northern Elders Forum that visited the Governor and to them the Governor is doing good to their pockets, no problem.

“When did the Governor take care of Northerners in the State. He has refused to see me for six years. So, if they say they are thanking him, maybe money may have changed hands.

“Arewa Initiative for Peaceful Coexistence for which I am the president is distancing ourselves from that visit and those who followed NEF are on their own,” Alhaji Saido said.