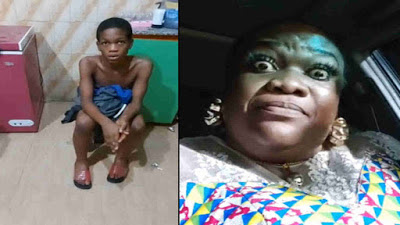 A woman alleging that her 11-year-old son was sexually molested by other college students in Akwa Ibom State says there is pressure on her to pull down video clips containing her complaint.

In the post, Mrs Okezie sent a special message to the Akwa Ibom Governor, Udom Emmanuel, who has ordered the education ministry in the state to investigate her allegation.

Recall that Mrs Okezie posted a video on Facebook a few days ago where she cried out that her son, a JSS1 student ofDeeper Life High School, Uyo, was sexually molested by his seniors when he wasswitched from his hostel to another filled with senior students.

“They will remove his boxer and push their legs and hands into his anus,” the woman said in a previous video which has gone viral on Facebook and Twitter.

“Look at a child I sent to school, he came back with a broken anus,” she said.

Mrs Okezie said her son was frequently starved and beaten up by the senior students.

Deeper Life High School, owned by the pentecostal church, The Deeper Christian Life Ministry, said it is investigating the woman’s allegation, and has suspended the principal of the school, Ndidi Solomon.

“Right now, what I understand is that Deeper Life High School wants me to take off the video – all the live recordings I have done,” Mrs Okezie in her Facebook live broadcast on Wednesday.

She said she went public, on Facebook, in the first instance, after she was unsuccessful at getting the school to respond to her complaint.

“Before I came to social media, everything I sent to your principal, Ndidi Solomon, she never responded to any of my cries,” she said.

“I have promised Nigerians that I will keep them updated as the situation goes on.”

Mrs Okezie said some people from the school were trying to muddle up issues in order to cause confusion. She said the school, for instance, are claiming that DNA of the victim of the alleged sexual abuse does not match her own.

The woman said she was dissatisfied with the way the ministry of education was carrying out its investigation of the case.

She said the commissioner for education barred them from bringing in their lawyer to a meeting that was called at the ministry on Tuesday over the matter, while a team consisting of several people representing the Deeper Life High School were allowed into the meeting.

One of the men who came with the team from the school was dropping Governor Emmanuel’s name, perhaps to intimidate her and her husband at the meeting, she said.

She identified the man as ‘pastor’ Nicholas Ekarika and said the man claimed “he was always in a meeting with the governor.”

Mrs Okezie said the man told her in the meeting to pull down the videos she uploaded on Facebook about the case. “Why would you tell me to take it off? That is where my voice was heard,” she said.

She said the ministry of education wanted to go to the hospital around 11 p.m. to interview her son, the victim of the alleged sexual abuse, but that she objected to it.

Moreover, the ministry officials told her she would stay outside the hospital room while her son would be interviewed, she said.

“I told them it is not done anywhere, the boy is on sickbed, he should be sleeping by 1 1p.m. You cannot interview him with sleepy eyes.

“You are conducting an interview with a minor without his parents, how am I sure you will not put words into his mouth?

Mrs Okezie said it would be better for the commissioner to ask the governor to give more time for the investigation to be done than to rush over it and end up not getting facts.

“From what I saw yesterday, I am not okay with the investigation going on,” Mrs Okezie said repeatedly.

She said she had no other means of telling her story to Nigerians, especially to Governor Emmanuel, except through her Facebook updates.

The Commissioner for Education, Enobong Mbobo, has, however, said that Mrs Okezie on Tuesday obstructed her ministry from carrying out their investigation.

“If I were her, I would have allowed investigation, the woman is becoming too loud, she is not allowing us to do our work,” Mrs Mbobo said on Wednesday.

On Mrs Okezie’s objection to her son being interviewed around 11 p.m. in the hospital, the commissioner said, “The boy has been sleeping all day, he was wide awake. He had nothing to do, if he were sleeping nobody would have disturbed him.”

Mrs Solomon, the suspended principal of the Deeper Life High School, did not respond to calls and a text message seeking her comment.