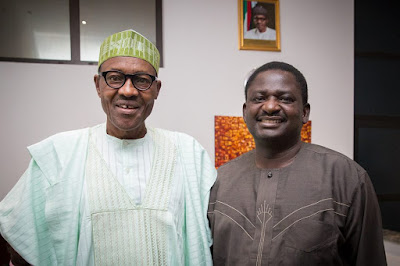 President Muhammadu Buhari had himself dispelled the trending allegation that he was dead and had been replaced by his clone, one Jubril Aminu from Sudan.

The President’s aides had also waved it aside on several occasions, meaning it doesn’t deserve any attention.

Yet the rumour sown by Nnamdi Kanu, leader of the Indigenous People of Biafra, IPOB, in 2017, has continued to grow luxuriantly like a seed planted by the riverside. And not only do many Nigerians believe that narrative wholeheartedly, they are ready to stake their lives on it

However, Special Adviser to the President on Media and Publicity, Femi Adesina, who recently called  those peddling the rumour idiots, has come out to proffer proof that the President is not dead, as many erroneously believe, but is alive and well.

Adesina made this revelation on Sunday, 27 December 2020 on Hot Seat Special, a live programme on Ogun State Television, OGTV. According to the President’s spokesman he knew Buhari was not dead the very day he returned from his medical trip to the United Kingdom in August 2017.

“Some people say the person that went was not the person that came back. I would tell you a story. The day the president came back, August 2017, was the day the Chief of Defence Staff, General Abayomi Olonisakin, was giving out his daughter in marriage.

“I went to attend that marriage. And I wore agbada and a cap, which I rarely wear. From there I went to the airport to meet Mr President.  And he alighted from the plane.  He began to shake his aides one by one and he would have one wisecrack or the other to say to each person.

When he got to me, he said, ‘Adesina, this is the best I have seen you wear.  I have never seen you in agbada before.’  Now if he was a different person that came how would he know I was Adesina? How would he know that that was not my usual way of dressing? So it doesn’t make sense.”