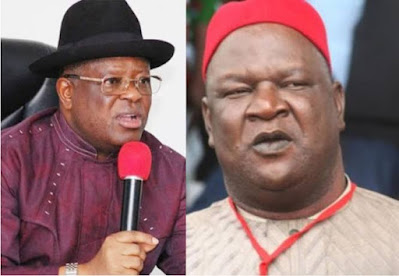 The governor of Ebonyi State, Chief David Umahi, yesterday ordered for the immediate sack of all the kinsmen of the former Secretary to the government of the federation, Pius Anyim shortly after his face-off with him.

Recall that the governor and the former SGF had a few days ago been engaging each other in a war of words.

The governor in a statement signed and forwarded to journalists by the Secretary to the State Government, SSG, Kenneth Ugbala noted that the sacked officers should submit all government properties that are in their possession.

It could be recalled that Umahi since after his defection to the All Progressives Congress, APC, has sacked a number of his former aides with the intent to accommodate APC stalwarts in his administration.

Recall also that the governor has a few days back sacked all coordinators, Special Technical Assistants, STAs and others from Ohaukwu LGA Area that are allegedly loyalists of the former governor, Sam Egwu.

Meanwhile, the governor had yesterday ordered for the immediate sack of all the STAs, TAs, All Liaison Officers, All Management Committee members from Ivo Local Government Area of the state.

The statement reads in part: “In keeping with policy of inclusive governance, the Governor of Ebonyi State Chief David Umahi has approved the removal from office of the following political office holders from Ivo Local Government Area:

Umahi further noted that “the affected office holders are to handover all Government Property in their possession to the Secretary to the State Government and Coordinating Commissioner by the close of work today, 2nd December 2020,” he stated.