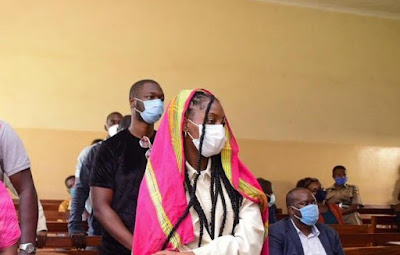 A video wherein Tems, Nigerian R&B vocalist, could be seen turning down pleas to eat amid her ongoing trial in Uganda has surfaced online and gone viral.

The ‘For Broken Ears‘ singer was arrested alongside Omah Lay, her Nigerian colleague, over their involvement in an unauthorised concert that held on Saturday night in Ddungu Resort in Munyonyo, Kampala City.

The pair were thereafter remanded in police custody alongside four Ugandans after they were arraigned before a court.

In the now-viral video, which appeared to have been taken inside the courtroom, a woman could be seen pleading with Tems to eat.

But the Nigerian singer, who seemed unhappy with the ongoing ordeal, replied that she would not eat any food.

Not satisfied, the woman appeared to have lectured the singer on the dangers of starving herself.

Tems, whose real name is Temilade Openiyi, however, maintained her earlier stance, noting that she can decide what to do with her body.

“It’s my body….what if l want to die, then you don’t have a say. I don’t want to eat..you can’t be forcing food down my throat. I have not eaten for the past 24 hours and l won’t eat for the next 48 hours,” she could be heard saying.

Tems is on hunger strike, she hasn't eaten for the past 48 hours.

Uganda, nothing should happen to Omah Lay and Tems #FreeTems#FreeOmahLay

The development comes after Omah Lay also cried out in a Twitter rage, alleging that he has not been given a fair hearing.

Abike Dabiri-Erewa, the chairman of the Nigerians in Diaspora Commission (NIDCOM), had earlier assured that efforts are ongoing to ensure the two singers regain freedom.