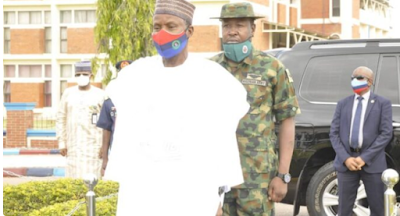 Bashir Salihi-Magashi, minister of defence, says security operatives have intelligence, including the “whereabouts and movements” of abductors of the students of Government Science Secondary School, Kankara, Katsina state.

On Friday night, gunmen invaded the school, shooting into the air to scare away people in the area – a situation that led to over 300 students missing.

Speaking when  a federal government delegation met with Aminu Masari, governor of Katsina, on Sunday, Salihi-Magashi said the task of the army and police  to recover the missing students is easy.

“We have strategies and I believe we can do it without any collateral damage to the people of Katsina State,” he said.

“We have the intelligence, the information, their whereabouts, their movements and their methods of operations. The task is easy for the armed forces and the police.

“The only thing is that we need prayers from you so that there will be no collateral damage in the event of being hostile. We assure you that all hands are on deck.”

The defence minister said the abducted students will be recovered soon, adding that security agencies are working hard to ensure their release.

He said: “So far, we have been briefed by the Police Commissioner, GOC, Brigade Commander, Air Commander, DSS, and other security officers.

“Our interest is to keep ourselves abreast with what actually happened two days ago and we believe with their briefings, this task is going to be simple for us.”