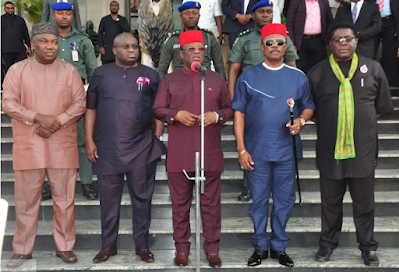 The Chairman of the South-East Governors Forum, David Umahi, has described the recently established Eastern Security Network, ESN, as laughable.

Dave Umahi, Chairman of the forum and Governor Ebonyi State, described ESN as a side distraction.

Recall that Nnamdi Kanu, leader of the Indigenous People of Biafra, IPOB, had recently inaugurated ESN.

The IPOB leader had explained that the establishment of the security network was aimed at securing the Southeast from kidnapping and all forms of criminalities.

However, Umahi said ESN should be ignored because governors were doing their best to secure the region.

Umahi, in a statement, said: “Our region remains the safest, and nobody can deny this. And so, our brother said he had formed a security outfit for the Southeast.

“It is very laughable and should be ignored. I commend the southeast governors very highly. It is only the Southeast that the leaders are being criticized openly. I want them to ignore the side distractions.”