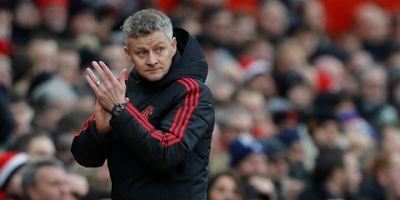 Ole Gunnar Solskjaer believes Manchester United’s players will rise to the occasion as they head into their make-or-break Champions League clash at RB Leipzig without Edinson Cavani and Anthony Martial.

After losing 3-1 at home to Paris Saint-Germain last week, United are level on nine points with the French champions and their German opponents ahead of the final round of games in Group H on Tuesday.

United will qualify if they avoid defeat to Leipzig, where the Red Devils will be without attackers Cavani and Martial after they sustained knocks in Saturday’s 3-1 comeback win at West Ham.

An unwanted Europa League campaign awaits if they falter against last season’s Champions League semi-finalists, but Solskjaer believes his players will step up.

“The players are here, they are Man United players because they have qualities that we’ve looked for and I’m sure that tomorrow night will prove that’s the reason why they’re here, they will show it,” said Solskjaer.

“I think the character of the group is getting better and better and we’re looking forward to the game.”

United, who last won the Champions League in 2008, can take heart from their striking away form this season.

The three-time European champions have won eight out of their nine away games, coming from behind to triumph in all five of their Premier League games on the road.

“It’s something that we want, games like this,” said the Norwegian boss, who famously scored the winning goal for United in the 1999 Champions League final.

“It’s a tradition for Man United — we never make it easy for ourselves.

“Of course we look at the games, especially the away game against Istanbul (Basaksehir) that we could have got three points, but that’s just the way we do things.”

United’s task at the Red Bull Arena will be made tougher by the absence of three first-team players.

Fred is suspended following last week’s red card against PSG, while attackers Cavani and Martial have not travelled after sustaining knocks at the London Stadium.

“David (De Gea) is back again, Luke (Shaw) is travelling,” Solskjaer said of his 23-strong travelling squad “Edinson and Anthony, they’ve only minor niggles but they won’t be making the trip.”

Solskjaer’s side have struggled to match their away form at an empty Old Trafford, although they did romp to a 5-0 victory at home against Leipzig.

“You can’t ignore it,” the United boss said of that stunning October win. “Of course it’s a game that we’ll remember fondly because we did many things right — and we need to do lots of things right again.

“But we should also correct the few wrongs that we had and we will. We’ve prepared well. We know Leipzig well enough to know that they’re unpredictable in their shape or systems but we know the players and the style they play in.”