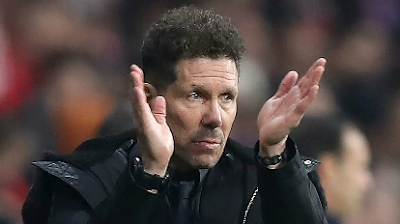 Atletico Madrid manager, Diego Simeone, has paid tribute to striker, Diego Costa, after the Spaniard’s contract was terminated by the club on Tuesday.

Recall that Atletico Madrid on Tuesday announced they had terminated Costa’s contract following mutual consent ahead of the January transfer window.

“Atlético de Madrid and Diego Costa have reached an agreement for the termination of the striker’s contract, which was to end on June 30, 2021.

“The striker asked to leave the club for personal reasons a few days ago and on Tuesday signed the termination of his contract,” Atletico Madrid’s statement read.

Reacting, Simeone said he was grateful to Costa for giving Atletico Madrid his heart during his time at the La Liga giants.

“I am grateful to him (Diego Costa), like all the people who gave us their hearts,” Simeone said as quoted by Marca.

“We have not seen each other for a few days because Diego did not come to train while he was negotiating.

“Most importantly, we can hug each other when we see each other, celebrating our memories,” he said.