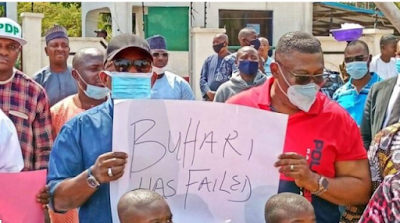 Uche Secondus, national chairman of the Peoples Democratic Party (PDP), on Thursday led protesters who called on President Muhammadu Buhari to rescue the students abducted from a secondary school in Kankara, Katsina state.

The demonstration held around Legacy House, an office of the opposition party, in the Maitama district of the federal capital territory (FCT).

The protesters, who carried placards with inscriptions such as: “Buhari has failed”, “Shame on PMB”, were also chanting “Buhari, bring back our boys.”

At the weekend, gunmen abducted over 300 students from a secondary school in Kankara, Katsina.

The faction of Boko Haram led Abubakar Shekau has since claimed responsibility for the abduction of the schoolboys.

Speaking with reporters on Thursday, Secondus said their only request is for the president to rescue the students.

“This is a peaceful protest. All we saying, Buhari bring back our boys in Katsina. It is important – we are in pain, the parents are in pain,” Secondus said.