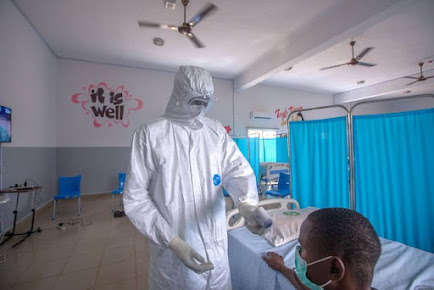 Despite the talks of COVID-19 second wave, confirmed cases went southwards again for the the fourth day.

The Nigeria Centre For Disease Control (NCDC) Monday announced just 356 cases for the 14 states and the Federal capital that registered new infections.

This happened even as the Federal Government announced new restrictions, shutting bars, restaurants and limiting gatherings to 50.

However, six persons died of the virus in the last 24 hours, taking the death toll to 1,127.

Another 180 people were discharged from the various isolations centres.

“Our discharges today include 59 community recoveries in Lagos State managed in line with guidelines”, the NCDc said.

Since 17 December, when a record 1,145 daily infections were registered, infection numbers have been nosediving.

Despite the low figures, the Presidential Task Force in charge of the virus believes Nigeria is in the grips of a second wave.

Boss Mustapha, secretary to the government, who also heads the task Force announced new restrictions on Monday, just as some states, such as Lagos, Niger, Kaduna, Imo announced theirs.

The restrictions will last five weeks.

Mustapha said: “In line with the authorisation, the PTF wishes to issue the following advisories to sub-national entities for implementation over the next five weeks, because these activities are considered super spreader events.

“Close all restaurants, except those providing services to hotel residents; takeaways, home deliveries and drive-ins shall remain closed.

“End of year events shall be restricted to not more than 50 people.

“Limit all gatherings linked to religious events to less than 50 per cent capacity of the facility of use during which physical distancing, mandatory use of face masks shall be strictly enforced.

“Where more than 50 persons are attending, any such event, the gathering should be held outdoors only.”