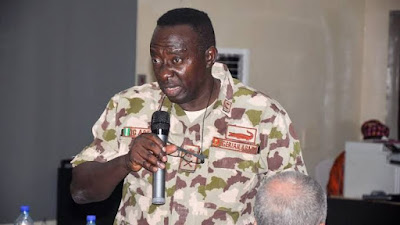 The Southern and Middle Belt Leaders Forum (SMBLF) has flayed the Nigerian Army over the demotion of General Olusegun Adeniyi, by a rank.

Adeniyi had in March, in a viral video, revealed that troops fighting Boko Haram terrorists lacked weapons and credible intelligence need for their mission.

The court-martial, however, found  Major General guilty of 'producing and publicizing a video on the counter-insurgency operation in the North-East in a manner that embarrassed and ridiculed the armed forces of Nigeria'.

But SMBLF in a statement signed by Chief Guy Ikokwu (South East), Senator Bassey Henshaw (South-South), Isuwa Dogo (Middle Belt), and Yinka Odumakin (South West) wondered why the rule used to punish Adeniyi was relaxed against some Northern Muslim officers, who were accused of giving out the routes of soldiers, who were brutally murdered over two years ago, to Boko Haram.

The group said it was unfortunate that the senior military officer's ordeal started with his complaints about those who sent him to lead troops to fight Boko Haram insurgencies with bare knuckles.

The statement read, "The troops, under the gallant General, who had won so many awards and commendations for his command of Lafiya Dole, have now lost so many soldiers in combat, recently, raising questions on what happened to the last $1 billion released to the Armed Forces to buy weapons.

"Gen. Adeniyi was leading a large troop of soldiers on a particular operation when they came under heavy attacks by Boko Haram. The Commander was seen in two of four video clips giving a recorded situation report to the Chief of Army.

"He blamed the deadly attack his troops suffered on very wrong intelligence assessment earlier conducted before they were deployed. While it may be said that the Army is only enforcing its rule, why was the rule muted against northern -Muslim officers who were accused of giving out the routes of our soldiers who were brutally murdered over two years ago to Boko Haram?

"And what has the Air Force done till date over the controversial killing of Tolulope Arotile in Kaduna last year, an officer renowned for deadly exploits against Boko Haram? It is an officer it commended for conducting a good fight against Boko Haram, who is being promptly court-martialled because he says he lacks weapons."