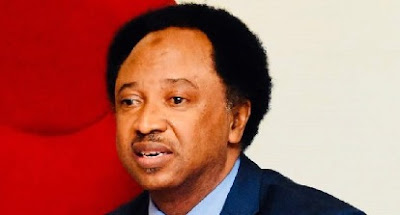 According to Senator Shehu Sani, ” Nda-Isaiah the Publisher of Leadership Newspaper was a childhood friend and a brother. His father and mine worked at the New Nigerian Newspapers for over three decades of their lives.

“We lived at the New Nigerian Staff Quaters, Malali until 1981. Death hath taken one of the most patriotic, intelligent and resourceful Nigerians.”

Senator Shehu further explained that, “The late Sam lived an accomplished life. He was a barrier breaker who loved to dare the most difficult and do the impossible. He broke the jinx of Newspaper publishing in the North with his outfits, beginning with Economic confidential to the Leadership Newspaper. Sam’s courage and confidence fired him to stand against the mightiest and contested for the Presidency in 2015 and lost at the APC primaries.

“Sam was a fearless rebel. He was a friend of the elites and the poor. He was a good friend who can look at the face of any of his big friends and tell him the bitter truth. Sam has gotten into trouble many times because of his pen or the pen of his employees.

“He was a young man troubled and aged by Nigeria’s unending problems.

“Sam was a Kaduna boy who worked for General Buhari in the late 90s until the early 2000s. He religiously fought against the third term bid of the former President, Obasanjo and got himself into trouble on many occasions. Sam was a man with BIG IDEAS in a country that has become a graveyard of ideas.

“Sam was a stammerer and that was more evident when he gets angry about national issues and wants to express himself.

“The year 2020AD will be noted and recorded as one of the worst years in history that has taken a record number of Nigeria’s best.

“When I once asked Sam why did he drop his pen and rested his weekly column, he said every of his sentence gets him into deeper troubles not just with his enemies who do wrong but with friends who get it wrong.

Sam was a voice for justice, equity and unity and an inspiration for those determined to take the rough road to their dreams.

“Sam was a great Nationalist who will always be missed and remembered for the impact he made in the lives of those he met and those he never met in person.