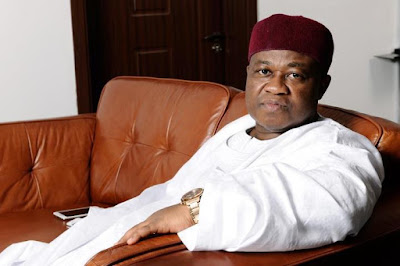 The Chairman and publisher of LEADERSHIP Newspaper, Sam Nda-Isaiah, is dead, his family has announced.

Mr Nda-Isaiah’s newspaper, LEADERSHIP, in a report Saturday morning, quoted his family as saying, “We are deeply saddened to announce the news of the passing of the chairman of LEADERSHIP Group/National Economy, Mr. Sam Nda-Isaiah.

“He died in Abuja on Friday night, after a brief illness. Nda-Isaiah was a family man, a serial entrepreneur and visioner, and a passionate politician. He was, above all, a man of faith. Even in this moment of grief, we know he is in a better place.”

LEADERSHIP went on to profile its late publisher as follows:

Nda-Isaiah was a pharmacist, but he made his mark as a newspaperman, with three dailies, including the flagship and Nigeria’s most influential newspaper, LEADERSHIP, in his stable.

He was also a serial entrepreneur with a portfolio of thriving businesses and a founding member of the All Progressives Congress (APC) on whose platform he contested for presidential ticket in 2014.

Nda-Isaiah, a bridge-builder and champion of Big Ideas, a number of which he vigorously canvassed, also held the traditional title of Kakaki Nupe, the spokesperson of the Nupe people.

He was a promoter of Nigeria’s unity and an outstanding student of history and global politics.

His last major outing was on Thursday, December 10, when he inaugurated the Board of Economists of NATIONAL ECONOMY Media Limited, a subsidiary of the LEADERSHIP Group.

Nda-Isaiah was born in Minna, capital of Niger State on May 1, 1962. He attended the UNA Elementary School before switching over to the Christ Church School, Kaduna in 1968 to complete his primary school education.

He attended the Federal Government College, Kaduna, from 1974 to 1979. He later studied Pharmacy at the Obafemi Awolowo University and did his National Youth Service Corps programme at the Ekiti State General Hospital in 1984.

Nda-Isaiah, fondly called “Sam”, is an alumnus of the Lee Kuan Yew School of Public Policy at the National University of Singapore.

Nda-Isaiah began his working career as a pharmacist at the Kano Specialist Hospital before he moved to the General Hospital, Minna. He worked at Pfizer Products Limited from 1985 to 1989.

A passionate newspaperman and pundit, his column, “Last Word” with a footnote, “Earshot”, was a must read. He started the column as special writer and editorial board member of Daily Trust, before he founded LEADERSHIP with proceeds from the launch of a collection of some of his finest articles in 2001. Before LEADERSHIP became a full-fledged newspaper, Nda-Isaiah started with, LEADERSHIP CONFIDENTIAL, a newsletter that was of tremendous value and insights, especially among diplomats, top politicians and business owners.

Sam demonstrated exceptional courage through his write-ups, a quality that popularised the newspaper and often put him at odds with government, especially under former Presidents Umaru Musa Yar’Adua and Olusegun Obasanjo.

As a result of his contributions to the media industry, Nda-Isaiah was called to serve as a committee member in the Kano State government to revive The Triumph Newspapers owned by the state government. In 2003, he was in charge of President Muhammadu Buhari’s presidential campaign publicity.

He was a member of the Asian think-tank, the Global Institute for Tomorrow in Hong Kong. In 2019 he was appointed board member of the Baze University, Abuja.

In 2015, Nda-Isaiah ran for the country’s presidency, contesting in the primaries of the All Progressives Congress (APC), with the campaign slogan, Big Ideas. He however lost in the keenly contested primaries.

He held the title of Kakaki Nupe conferred on him by the current Etsu Nupe, Alhaji Yahaya Abubakar. He was also conferred with a chieftaincy title, Aare Baaroyin of Akure Kingdom, by Oba Aladetoyinbo Ogunlade Aladelusi, Odundun.

A very hard-working personality in all he sought to do, he was fully committed to ideals which he believed in. He was a great patriot who believed in the unity of Nigeria.