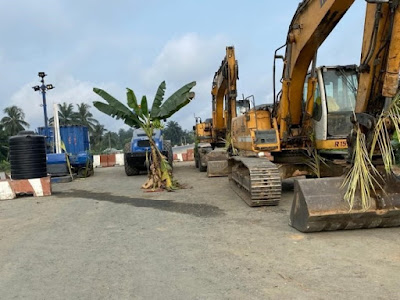 A federal road construction by Julius Berger Nigeria Plc at Nkim Itam in Itu local government area of Akwa Ibom state has reportedly been “stopped” by one Bernard Ekpenyong.

According to ForeFront, Ukpong Nkereuwen, the federal controller of works in the state, alleged that Ekpenyong had employed the services of some youth of the community to disrupt the project.

He was also alleged to have planted fetish objects on the equipment being used by the construction company at the site of the project.

Trouble started when Ekpenyong reportedly claimed that the road project had caused his filling station to be flooded.

According to the newspaper, Julius Berger had, in May 2020, drawn the attention of the state’s ministry of works to “the poor channeling of huge surface runoff water from a nearby automobile assembling company” which could cause flooding.

The ministry was said to have obtained approval from its headquarters in Abuja for the drainage to be enlarged, while financial compensation would be paid to owners of the affected properties.

However, Ekpenyong was said to have insisted on being paid first before the new drainage system could be channelled across the entrance of his petrol station.

A source at the ministry of works was quoted as saying all entreaties to make Ekpenyong see reason fell on deaf ears, and consequently, the drainage became flooded by heavy rain which affected his filling station.

“All entreaties by the ministry for Ekpenyong to let the works progress before the advent of the rain, considering its real potential for flooding issues, fell on deaf ears,” the source reportedly said.

“Every attempt to convince Ekpenyong that payment would be made to him and others even as the construction would be progressing was equally rebuffed.

“That was how Ekpenyong obstructed the flood prevention works until the rains came and worsened the water discharge from the nearby auto assembly company to cause the flooding problem for which Ekpenyong is now seeking a damage claim of almost N200 million from the FG.”

The source also alleged that Ekpenyong and some other community members “have since been paid the compensation approved for the new drainage design which he is now obstructing”.