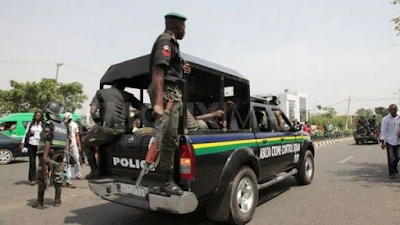 According to reports, the deceased, identified as ‘School Boy’ was shot dead at a close range by a policeman attached to a patrol team around 6.00am on Thursday due to his refusal to part with N100 bribe.

According to sources, immediately the police team found out that ”School Boy” was shot dead and his tricycle plunged into the gutter, they fled the scene of the of the incident to avoid reprisal attack from angry passers-by who witnessed the incident.

However, a few minutes after the news of of the death of “School Boy”, broke with videos in social media, there was spontaneous protests from the commercial tricycle operators who were joined by angry youths and residents.

Protesters also tried to march to the Police Special Area Command in Rumuodomaya but were resisted by policemen who shot both teargas canisters and live bullets sporadically for several hours to ward them off.

In a Video that went viral immediately after the incident, relations and sympathetic onlookers were seen weeping over the corpse of the late tricycle rider.

SP Nnamdi Omoni, spokesman of the Rivers State Police Command confirmed the incident and that the policeman who fired the shot that killed the tricycle rider had been arrested and demobilised.

Meanwhile, shop owners in Rumuodomaya and Rukpokwu and those along Airport road hurriedly closed their shops, while commuters trekked long distances as vehicles were off the road.