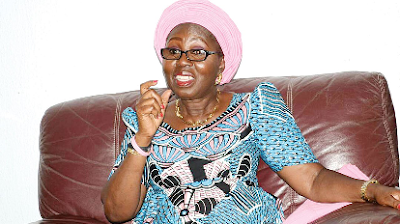 Ondo State first lady, Betty Anyanwu-Akeredolu, has reacted to reports of the reconciliation of Channels TV reporter, Pius Angbo and his wife, Ifeyinwa after he was accused of hitting and inflicting injuries on her.

It was reported that Ifenyinwa in a video which went viral online accused her husband, Pius who is also a Channels TV Reporter of battering her and inflicting grievous wounds on her person because she demanded he stopped his lavish expenditure on different women.

She also accused him of battery while she was pregnant and after she had given birth through a caesarian session.

The video generated a lot of backlash from Nigerians on social media with calls for his arrest.

However, Ortom on Monday met with the couple and reconciled them.

He also counselled them to settle their differences amicably and shun the temptation of engaging in violence.

Reacting, the Ondo first lady in a tweet on her account on Monday advised women to raise their sons to respect women.

The Ondo First Lady explained that wives are not rehabilitation centres for ”badly raised husbands”.

“Nigerian Mothers, it is your responsibility to raise your sons to respect womanhood.

“Counsel them not to turn somebody’s daughter to a punching bag. Wife beating no matter the circumstance is UNACCEPTABLE!

“Its a no no for me and people with a sense of decency.

“Mothers do your job from infancy,” she said.