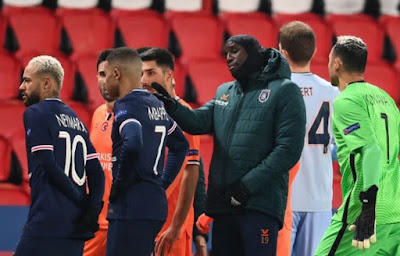 The match was abandoned after players from both sides walked off the pitch, alleging Coltescu used a racial slur towards Basaksehir’s assistant coach, Pierre Webo, before he was sent off.

The former Cameroon international had to be dragged away as he repeatedly yelled, “Why did you say n****?” with the rest of the Basaksehir coaches and substitutes in uproar.

However, in a video which emerged online, Demba Ba, a former Chelsea forward, confronted the official on the touchline, saying: “You never say: “This white guy”. You say: “This guy”.

“So why when you mention a black guy do you have to say: “This black guy”? But seriously, I don’t get it!”.

Meanwhile, UEFA had rescheduled the Champions League game between PSG and Istanbul Basaksehir, after it was suspended on Tuesday night.

The game will be played with a different set of officials on Wednesday with UEFA promising a full investigation.