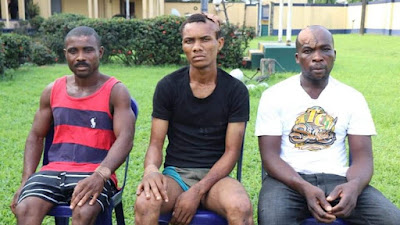 They were arrested in connection with the attack on a church.

The Police said last Saturday said they detonated bombs that caused damage to the religious centre.

The building had been attacked during the civil disorder that followed the End SARS protest.

Parading the suspects, the Commissioner of Police, Joseph Mukan, said they confessed to their complicity and respective roles in the act.

Their identities were given as Progress Onwudinjo, 37 years from Etche LGA; Apuru Victor, 23 years from Ebonyi State, and John Okorie, 38 years from Abia State.

Mukan disclosed that they admitted to being IPOB followers.

According to the CP, they “acted on the directive of a certain benefactor whose name will not be made public for obvious reasons pending the outcome of the investigation. Investigation is still ongoing at the end of which they will be charged to court”.

Mukan warned all miscreants and IPOB loyalists to have a rethink or face the full weight of the law.