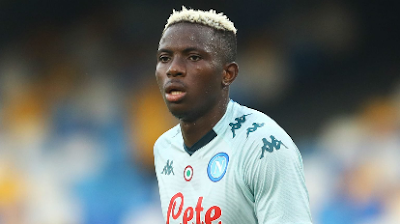 On Saturday, Tuttosport claimed Super Eagles medical personnel did more damage to the 21-year-old’s injury, by trying to fix his dislocated shoulder immediately on the field.

Osimhen dislocated his shoulder during Nigeria’s 4-4 draw against Sierra Leone in an Africa Cup of Nations qualifying fixture on November 13.

He is yet to fully recover from the setback, but has begun individual training sessions at the Serie A club.

After coming across the story on Twitter, Osimhen reacted by describing it as a false story.

“Not true tho,” he wrote after quoting the report.

Osimhen has scored two goals in eight appearances for Gennaro Gattuso’s side so far this campaign.