None is missing, says vice-principal on return of Kankara schoolboys 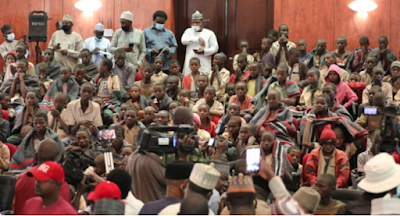 Yahaya Salauwa, vice-principal of Government Science Secondary School, Kankara, Katsina state, says all the missing pupils have been accounted for.

Some gunmen attacked the school on December 11, kidnapping hundreds of schoolboys.

Boko Haram had claimed responsibility for the attack but Aminu Masari, Katsina state governor, said bandits were behind it.

On Thursday, 340 of the boys regained their freedom and will be reunited with their families later in the day.

One of the pupils who escaped captivity earlier claimed that 520 of them were led to the bush by the gunmen.

But speaking on Friday at the Katsina state government house where the freed schoolboys were hosted, Salauwa said he recognises the pupils and that their number is complete.

“I can confirm to you that the student I saw were all our students and we’re extremely excited to see them alive,” Salauwa said.

“We can’t forget the day they were abducted, we were all traumatised and became sleepless praying for their safe return. I can tell you that all the students are complete and none is missing.”

President Muhammadu Buhari, who was in the state when the abduction took place, is scheduled to meet with the schoolboys by 3pm today.