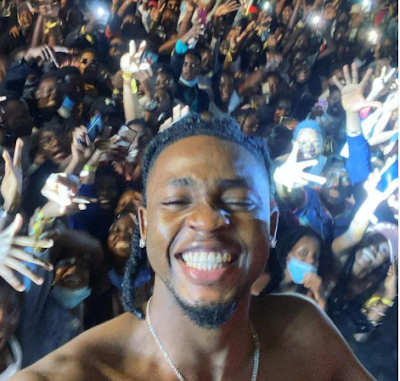 On Sunday, December 13, 2020, news broke on social media that KeyQaad and Warner Music artist, Omah Lay had been arrested in Kampala Uganda. The news was broken by Ugandan journalist, Canary Mugume.

In a tweet at 4:19 pm, Mugume wrote, "Just in: Nigerian Artist Omah lay has been arrested by Katwe police, together with the manager of the venue where he performed from last night; Dungu Ivan and the Events manager Prim Kasana, all are in custody, @Lukowoyesigyire confirms."

He had allegedly confirmed the news from Luk Owoyesigyire, Assistant Superintendent of Police and Deputy Police Spokesperson, Kampala Metropolitan Police.

On the night of December 12, 2020, Omah Lay had performed at The Big Brunch, which held at Speke Resort, Wavamunno Rd, Kampala, Uganda. But apparently, the event hadn't gone as planned.

It is reported that his arrest follows a public outcry by Ugandan entertainers who castigated the Police for allowing international artistes to hold concerts while the local ones are denied.

Police hasn’t disclosed charges preferred against the Nigerian star but The Tower Post understands that he allegedly flouted Covid19 guidelines as issued by the President and the charges could be related to doing a negligent act that could lead to the spread of a pandemic.

The Port Harcourt-bred artist has been Nigeria's revelation of 2020, having released Get Layd EP and What Have We Done EP. He is also favourite to be crowned Next Rated Artist at the 2020 Headies.