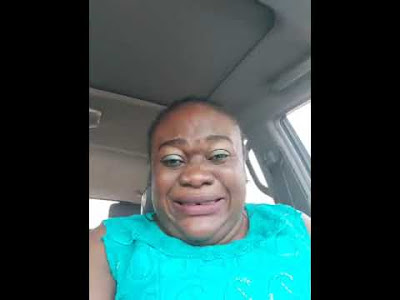 Deborah Okezie, the mother of Don Davis Archibong, a student of Deeper Life High School in Uyo, Akwa Ibom state, who was said to have been assaulted, has alleged threats to her life.

NigerianEye earlier reported how Okezie claimed that her son was starved and molested by some senior pupils of the school after the principal had moved him to the senior students’ hostel for urinating on his bed.

She had also claimed that her son told her the senior students pushed their hands and legs into his anus and threatened to kill him if he reported to his parents or the principal, who was recently suspended over the case.

On Thursday, Okezie took to her Facebook page to share another video saying Enobong Mbobo, the state’s commissioner for education, had invited her and her son for questioning on the instruction of the state government.

“Nigerians, I am not safe, if I am going now and they kill me, let people know what killed me. Any time you don’t see me come here live to update you, just know that they have collected my phone from me,” the mother claimed.

“We got a call saying we should come to the commissioner’s office. We told them the boy was not strong enough to come but they said the parents of the said boys, who were involved in whatever happened to Don Davis, were there.

“We told them Don Davis was taken to another hospital, they said we must bring him, but since we had to obey them because it was part of investigations as ordered by the governor, we pulled him out from the hospital.

“On getting to the commissioner’s office, Deeper Life School Board (members) were seated, the parents with their friends were seated and I was with my husband, Don Davis, and my other children.”

The mother alleged that Enobong had simply sided with the parents of the accused while requesting that she pull down the now-viral videos she made online.

Okezie claimed she was also attacked and questioned on why she went on a live broadcast.

According to her, Enobong had claimed her outburst posed a risk to the commissioner’s office and the government.

“She was asking me; do I know what that has done to her office? Do I know that America is watching? She said why did I do what I did? That I am putting the government’s name at risk? I said how?” Okezie said.

“Everybody saw that the government said the case should be investigated, what is putting the government at risk here? She said I should take the video off the internet immediately.

“I told the commissioner that she could not intimidate me; even if she wanted me to take the video off the air, she could do it one on one. She said do I know what that video had done to her office? I said, is it a lie? What are we hiding?

“Already biased, she turned to Don Davis and asked him what happened to him. He said they put fingers in his anus, then the woman started asking questions. I stood up and said no to this type of questioning.”

The mother, thereafter, alleged that her phone was seized as the commissioner asked her son pressurising questions she objected to.

Okezie claimed the parent of one of the boys who allegdly molested her son threatened to slap her while another attempted to beat her. She said the other parents who were initially seated had surrounded her after she told her son to get up for the exit.

“They said I am putting the government at risk, I told them I have always been a social media person. They pushed me and my children out of their office, they insulted me till I came downstairs this afternoon,” Okezie added.

“Before I left, the commissioner told them she would take the remaining up, I told her to go ahead. Anything she wants to go and tell the governor, let her go and tell him but this is the truth.

“The commissioner pushed me out of her office; let her tell the governor that she asked me to get the video off the air. I am doing this video so the governor will know the truth.”

The mother finally called on foreign bodies to come to her aid to avoid losing her life in her quest to get justice.