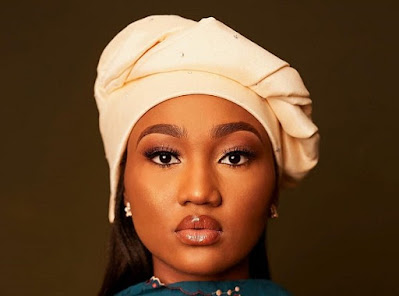 Zahra Buhari-Indimi, the daughter of President Muhammadu Buhari, has reacted to the recent killing of dozens of farmers by Boko Haram in Zamarmari, Jere local government area of Borno.

On Saturday, about 43 farmers were beheaded in Kwashabe village, about 20 kilometers north of Maiduguri after the insurgents initially approached them “in disguise” for food.

Reacting to the tragedy, Buhari described the killings as “senseless”, adding that the government had given support to the armed forces “to take all necessary steps to protect the country’s population and its territory.”

As reports about the continuing rise in the death toll from the massacre spread, Zahra took to her Instagram story on Monday to express grief over the killings.

“My heart bleeds,” she wrote in the company of a newspaper front page of the tragedy. 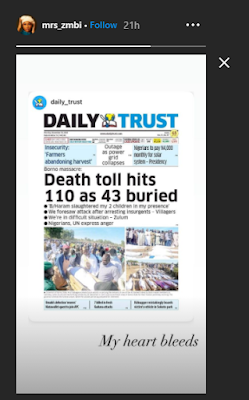 Zahra’s comment comes after the United Nations stated that over 100 civilians had been killed during the attack.

In his comment, Edward Kallon, the UN’s resident and humanitarian coordinator in Nigeria, had said: “The incident is the most violent direct attack against innocent civilians this year.

“I call for the perpetrators of this heinous and senseless act to be brought to justice. I also wish a speedy recovery to those who were wounded in the incident. We have received reports that several women may have been kidnapped.

“I call for their immediate release and return to safety. My thoughts are also with the rural communities in the area, who are shocked by the brutality of yesterday’s attack and fear for their safety.

“The entire UN system and the humanitarian community working to provide life-saving and development assistance to the most vulnerable in Borno State is outraged by the incident.”

Mr. Macaroni, a comedian, had also called on Buhari to resign if his government “cannot guarantee the safety of citizens.”