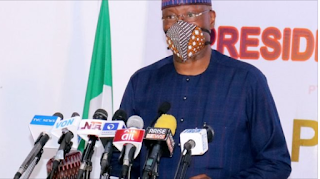 Boss Mustapha, secretary to the government of the federation (SGF), says four of his children have tested positive for coronavirus.

Mustapha, who is the chairman of the presidential task force on COVID-19, announced this during a media briefing in Abuja in Monday.

He also said a family member who is one-year-old tested positive for the virus.

The SGF had gone into isolation last week after he was exposed to the virus.

He said while he and his wife tested negative for the virus, his children are currently receiving treatment.

“The first test we ran, the result came back with six members within my household testing positive. The second test confirmed another three. From the month of March to November, we are being confronted with a figure of nine. It was quite a traumatic experience,” he said.

“My wife and I consistently tested negative but members of the household were infected. The last one, it was a nightmare. I was not infected but the truth about it, the agony of having members of your household… I am a father of four. All my four kids were infected.

“So, the agony that you go through even as a father, as a parent. A lot of you here are parents, so you need to do everything you can to ensure that you keep yourself and members of your family safe.”

Mustapha added that the spike in coronavirus cases is as a result of the consequences of certain occurrences in the last few weeks such as increase in social gatherings and disregard for health protocols.

“A lot of discussion is still going on around the calls for the restriction of international travels due to the discovery of new strains of the virus in certain countries,” he said.

“The PTF, aviation and health authorities including the WHO are assessing the situation closely and would take a position as soon as cogent scientific basis are established.”