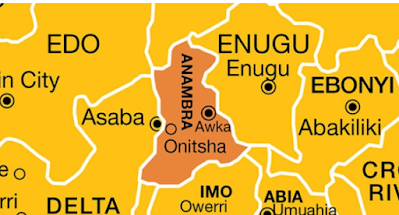 Some irate youths have burnt down the police station in Igboukwu in Aguata local government area of Anambra state.

It was learnt that the mob invaded the police station on Wednesday morning over the reported killing of a motorcyclist by a policeman on Tuesday night.

The victim whose name could not be immediately confirmed was shot following an altercation between some motorcyclists and police officers in the town.

The clash was as a result of the confiscation of some motorcycles by the officers on duty.

It was alleged that some of the motorcycles were seized after their operators refused to pay a bribe but the police state command denied this, saying it was because of a recent restriction on movement of motorcycles beyond 9pm in the state.

Haruna Mohammed, the command spokesman, confirmed that the officer shot the motorcyclist but added that it was an “accidental discharge”.

He said in a statement on Wednesday: “On the 15/12/2020 at about 10:30pm, there was an altercation between police operatives and motorcycle riders over some impounded motorcycles as a result of the recent restriction on movement of motorcycles beyond 9:pm in the State.

“The situation degenerated into a chaos which led to an accidental discharge that hit one motorcycle rider and burning of Igboukwu police station by irate youth..

“The Commissioner of Police CP John B. Abang, fdc is deeply saddened by the unfortunate incident and has ordered for detention of the policemen involved and full scale investigation into the matter.”

He said justice will be served in the case “and the outcome of Police investigation shall be made public in due course please”.

More than 90 individuals were reportedly killed by the security agency within one year — and this does not include suspects in police custody.