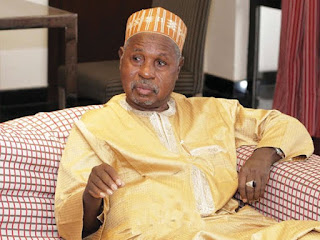 A former Director of the Department of State Services, Mike Ejiofor, has knocked the Katsina State Governor, Aminu Masari, and his Zamfara State counterpart, Bello Matawalle, for laying the foundation for kidnapping in error by negotiating with bandits.

“The state governments –both Zamfara and Katsina States –mistakenly laid the foundation for what is going on now; they started negotiation with the bandits who were not even ready to give up on their activities and this is what we are witnessing now.

“Even this Kankara incident, the governor came out to say they are negotiating, that is unacceptable. And you give these people the boldness and courage to continue to perpetrate this act,” Ejiofor said on Friday morning.

Masari had on Thursday night confirmed the release of 344 abducted schoolboys from Government Science Secondary School, Kankara. Masari on Friday morning later received the schoolboys who were transported from Zamfara State.

The governor, who had earlier said he was in talks with the abductors, however, insisted that no ransom was paid before the boys were released.

But Ejiofor said the best practice all over the world is not to negotiate with bandits but to strengthen the security apparatus and crush the criminals.

“I am not a pessimist but these things will continue to happen unless we strengthen the security of these states and take decisive actions. The Federal Government should take decisive actions against these bandits operating in the North-West. These well-organised bandits are looking for money. Anytime they do such kidnap, they are paid, and they use such money to buy more arms,” the former DSS director stated while featuring on Channels Television’s Sunrise Daily programme.

“It’s sad that they were moved from Kankara to Zamfara undetected by any security operative,” Ejiofor further stated while also urging security operatives to debrief the students before they are handed over to their parents.

Gunmen had invaded the school premises last Friday and abducted over 300 students after a gun duel with the police.

The abduction took place some hours after the President,  Muhammadu Buhari, arrived in Daura, Katsina for a week-long private visit.