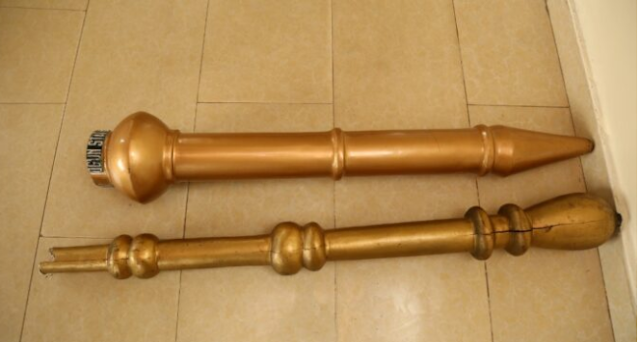 The mace stolen from the Ogun state house of assembly has been recovered in the Abule Ado area of Lagos state.

In a statement, Adejobi said policemen who acted on intelligence from some residents of Abule Ado found the symbol of authority of the Ogun assembly.

“The police operatives attached to Trade Fair Station of the Lagos State Police Command today Friday 11th December, 2020, recovered the missing mace of the Ogun State House of Assembly at Abule Ado Area of the state at about 8.30am,” he said.

“The police operatives, who were responsive, worked on an intelligence from the members of the community that someone in a moving vehicle, suspected to be Toyota Siena Space Wagon, threw out an object into the nearby bush and recovered the object which was later identified to be the Ogun State House of Assembly Mace.

“The mace had been allegedly stolen from the House of Assembly complex , Ogun State recently. It has been handed over to the Commissioner of Police, Lagos State, CP Hakeem Odumosu, who later instructed the DCP State CID, Lagos State, Yetunde Longe, to protect the mace and liaise with the Ogun State Police Command on the return of the recovered mace to Ogun State.

“The Commissioner of Police, Lagos State, CP Hakeem Odumosu however promised to assist the Ogun State Police Command in the investigation into the incident that led to the recovery of the mace.”

Olakunle Oluomo, speaker of the assembly, had said the motive of the theft was unknown.

“I do not know the motive of the stealing but it is true and the police are already on top of it,” he said.

“I have to say that even the CP himself and other top officials have been to the assembly to see what really happened.

“I am not suspecting anybody, I see it as a theft but the police investigation will tell us what really happened. It will not affect our sitting, when we are ready to sit ,our mace will come up.”