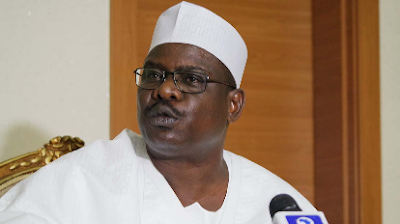 Ali Ndume, senator representing Borno South, has called on the International Criminal Court (ICC) and the Amnesty International (AI) to leave the Nigerian Army alone over alleged incidents of human rights abuses in the country.

Ndume disclosed this while answering questions from journalists on Tuesday in Abuja on the allegations of human rights abuses against the Nigerian Army by ICC and AI.

The senator also urged the Nigerian Army to concentrate on its task of fighting insurgency in Nigeria and ignore what he labelled a distraction by the two international organizations.

According to him, the same international organisations refused to refer to Boko Haram as a terrorist organization but instead preferred to refer to the insurgents as non-state actors.

“On the issue of unnecessary interference by Amnesty International and the International Criminal Court and other self-acclaimed celebrities and social media influencers who claimed to be patriotic Nigerians,” Ndume said.

“We that have been living with these problems and as leaders of the affected communities, know the feelings of our people.

“Right now, what the ICC is trying to do is destroying things instead of helping matters.

“We have the Nigerian government, the federal parliament and the nation’s judiciary. If there are human rights abuses, it’s only when there is a failure on the part of the three arms of government to act swiftly that we can draw the attention of the international community to it.

“Nigerians are more concerned about securing their country. The Nigerian Army and the police are overwhelmed already.

“Honestly, we will stand up against that. We are not encouraging human rights abuses, we can’t say there are no such things but they are definitely isolated cases especially when the Boko Haram insurgency reached its peak in 2014.

“There was a kind of confusion that led to the isolated cases of human rights abuses by the Nigerian Army and some of the armed forces.

“However, we stood up against it that time and that led to some soldiers’ court-martialed for human rights abuses. Some were even dismissed from the Army.

“For example, for involving in rape cases. It’s not that the Nigerian Army is not doing anything about it.

“There is a department known as civil-military relations, created by the Nigerian Army to address such cases and they are doing well.

“The power of investigation lies with the National Assembly. Nigerians know where they would report cases of human rights abuses in case it happens anywhere.

“Let the Amnesty International and others leave us alone. These are the same international organisations that refused to give us support needed to fight the insurgency.

“The same international organisations also refused to refer to Boko Haram as a terrorist organization but rather prefer to refer to the insurgents as non-state actors.”