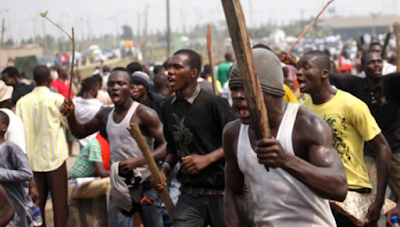 Some hoodlums on Saturday attacked INEC officials as they prepared to commence voting during Saturday’s by-election at Unit 13, Kosofe council area of Lagos State.

A News Agency of Nigeria (NAN) correspondent, who was at the centre reported that the hoodlums insisted on collecting money from INEC officials before voting could commence.

An INEC ad-hoc staff, Mrs Monsurat Aladeloba, told NAN that they packed up their materials so as to relocate from the area in the midst of the chaos between some electorate and the hoodlums.

“The boys were about fighting themselves when more police officers were drafted here,” she said.

NAN reports that the the situation was brought under control later after some community leaders intervened in the area.

One of the community leaders, Alhaji Gbenga Mola, told NAN that the hoodlums had been taken care of and assured the INEC officials of their safety.