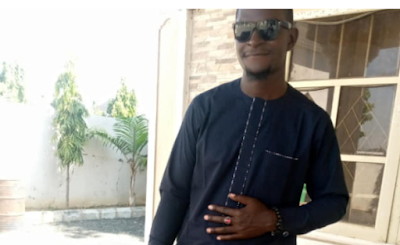 Emmanuel Peter, the humanitarian aid worker who was forced to announce his obituary days after his kidnap, is still alive.

Suspected Boko Haram insurgents had abducted Peter at Jakana along Damaturu-Maiduguri road in Yobe state, on Wednesday, and two days later, a post was made on his Facebook page, announcing that he was “already dead”.

At 12:25am on Friday, Peter’s Facebook profile picture changed to an image with a black background. His cover photo also changed.

Some minutes later, an obituary was shared on his timeline.

Although he reportedly denied his link with any humanitarian agency, the insurgents were said to have browsed through his iPad where they found adequate information on him.

TheCable quoting undisclosed sources reports that negotiation for his release is ongoing and that he was forced to fake his death for propaganda purposes.

Two weeks before his kidnap, Peter wedded his wife at Eyn state low-cost in Jimeta, Yola, capital of Adamawa state.

A flurry of congratulatory messages followed the wedding ceremony on November 28.

On Facebook, one Hannatu Ali Buba Thilza, wrote: “Let’s me drop it here, congratulations baby. am happy for you.”

The north-east region has been plagued with insecurity crisis, with several individuals abducted and killed, while government has repeatedly said it is on top of the situation.