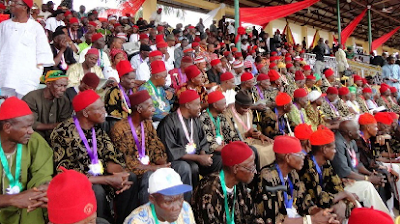 Ohanaeze Ndigbo Youth Council, OYC, Worldwide, has described the abduction and release of the 344 students of Government Science Secondary School, Kankara, Kastina State as an award winning drama of the year, 2020.

The Okechukwu Isiguzoro-led Ohanaeze group wondered the rationale and idea behind the drama.

According to the OYC, the display may have been carried out to make the service chiefs appear capable or “resist the idea of sacking them from office.”

“The evidence of (provisions of) new blankets for over 344 pupils of Kankara boys by Boko haram insurgents makes the abduction fake or jankara and organizers of the drama as amateurs.

“Northern leaders have refused to accept their leadership failures in governance, most of their political leaders are behind the insecurity situations in the north and are benefiting immensely from the huge budgetary allocations mapped out for insecurity challenges, the Kankara boys abduction is business as usual for Northern leaders.”