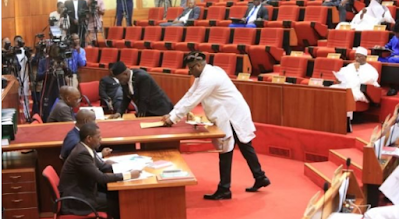 The Senate, on Tuesday, condemned in very strong terms the attack on Government Science School, Kankara, Katsina State which led to the abduction and disappearance of over 300 students.

Islamic extremist group, Boko Haram, has since claimed responsibility for the attack.

The red chamber, however, maintained its call for President Muhammadu Buhari to consider and implement the recommendations of its Adhoc Committee on Nigeria Security Challenges dated March, 17th 2020 and Senate Resolutions therefrom, as a holistic response to the mounting security challenges across the country.

The committee had recommended the dismissal of the current service chiefs.

The upper legislative chamber further rejected an additional motion by the Senate Leader, Yahaya Abdullahi (APC – Kebbi North); and seconded by Senator Abdullahi Adamu (APC – Nasarawa West) for the constitution of an Adhoc Committee comprising of APC and PDP lawmakers, to brainstorm on ways to curb the rising security challenges facing the country.