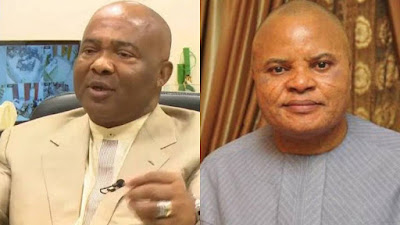 Barely three days after the Imo North bye-election, the political duo of Governor Hope Uzodinma and Senator Ifeanyi Araraume have locked horns and resorted to verbal attacks of who is destroying the party, the All Progressives Congress, APC.

In an interview conducted by the African Independent Television, AIT on Sunday, Ifeanyi Araraume accused Governor Hope Uzodinma of destroying the party by wrongly supporting Frank Ibezim whom he maintained, never participated in the party’s primaries.

He said that the Governor is using the power of incumbency to misdirect members of the party and that such was spelling doom for the party.

“Governor Hope Uzodinma is gradually destroying APC with his greed and show of supremacy. Despite the fact that he is the Governor, he does not own the state. He should know that there are some leaders in the state who also deserve a level of respect.

“Everybody knows how rooted I am in Okigwe zone. I have a very strong relationship with my people that they wouldn’t have chosen another in place of me.

“Frank Ibezim is not my match in the zone and never contested the party’s primaries. His name was not in the ballot. The Governor knows these but only wants to show his powers as a Governor.

“We all know Frank Ibezim was disqualified by a court of competent jurisdiction before the December 5th bye-election, and that suit was not appealed,” he explained.

Meanwhile, the Governor via his Chief Press Secretary, Oguwuike Nwachukwu had described the position of the former Senator as the cry of a drowning man who is navigating to his political oblivion.

He maintained that Frank Ibezim was the duly elected candidate of APC and participated fully during the party’s primaries and the bye-election on December 5.

Recall that the Independent National Electoral Commission, INEC, on Saturday, declared APC candidate winner of the bye-election but failed to mention whose name was on the ballot.